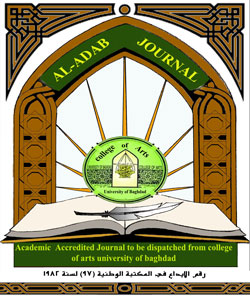 Recent years have witnessed a growing interest in the applied and practical aspects of scientific research in the fields of science, such as psychology, geography, sociology and other human sciences, and obtaining results that can be applied to specific phenomena, and then finding solutions to the problems that researchers set in order to achieve the desired goals. , especially in the field of community development, to reach the level of the advanced world, scientifically and civilly.
We are pleased to present to you the second issue of this year (2021), which is the issue (137) for the month of June, and it's an issue that complements the long series of achievements of Al-Adab Journal, The Published researches has been arranged according to the names of the researchers and their alphabetical sequence, taking into account the scientific rank in that. The journal has issued two supplements to this issue to accommodate the scientific researches accepted for publication in it.

What distinguishes this issue are the arrangement of scientific researches written in Arabic and Eastern languages ​​in its first part, and researches written in English and other foreign languages ​​in the second part, because there are researches in disciplines other than linguistics and literature written in English, and hence it has its own position in the arrangement The journal also continued to work with the electronic identifier for the Published researches in this issue (DOI), which was first used from the previous issue, which, as we mentioned earlier, facilitates the citation process for published researches in the journal and increases its electronic evaluation.

In conclusion, we say that this work calls us to provide the best in the upcoming issues, God willing, and also calls us to strive hard and diligently to work in order to achieve our cultural and scientific message, which the College of Arts has been striving to convey to all those interested in science and knowledge... and from God the success.